Game of Thrones Tours | The National

Featured in The National Newspaper, the local tour guide at Giant Tours Ireland had the pleasure of showing off the real-world Westeros to visiting journalists. Jamie Prentis from The National Newspaper was taken by Flip’s experience behind the scenes of Game of Thrones filming locations.

Once HBO decided to film some episodes of Game of Thrones in Northern Ireland, the world’s most watched television show boosted the life and tourism in the regional area along the North Coast of Ireland. Flip Robinson, a gentle giant from Ballycastle, began his unexpected career as a local tour guide as a result of the show’s hype. Former laborer and customer experience representative embraced the opportunity to become a double for two of the most prominent characters in Game of Thrones. Since then, he has made the most of his experience by offering Game of Thrones Tours to the increasing number of ardent fans and curious tourists visiting Northern Ireland.

When the popular HBO show went scouting for extras for the second season, Mr. Flip Robinson was among the crowds of people queuing around the corner of a Belfast Hotel nearly ten years ago. He was hoping to get some screen time as an extra, being six feet and eight inches tall. Flip auditioned for the first time nearly five years ago, and shortly after he received a flurry of messages and phone calls from producers of Game of Thrones asking him to show up the following morning. 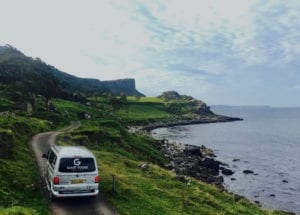 Flip played the roles of two of Game of Thrones’ most prominent characters, House Stark’s gentle giant Hodor and House Lannister’s towering enforcer Gregor Clegane (also known as The Mountain). This allowed Flip to interact with the show’s most known actors. As a local country lover, Flip claims that the show has had a significant impact on the tourism industry in the Northern Ireland region. Flip enjoys explaining the significance of a particular location of the series because he is thoroughly familiar with the various Game of Thrones filming locations and the surrounding areas. The local tour guide also enjoys taking fans to more remote locations that are not accessible by large tour buses travelling the coastal routes of Northern Ireland. 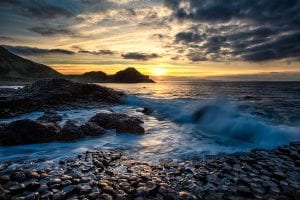 As a local of the area, Flip brings tourists to the hidden gems of Northern Ireland and highlights the “beautiful little places” and other rural areas along the north coast of Ireland. Flip got the idea for Giant Tours Ireland when he realised how many people were only visiting the well-known and easy-to-get-to Giant’s Causeway and missing out on what the coastal area had to offer. Flip began work as a guide to the 40,000 interlocking basalt columns that make up the causeway near the town of Bushmills shortly after he featured in Game of Thrones to gain experience before embarking on his endeavor. After completing a marketing course with assistance from a government tourism agency in 2016, Flip launched Giant Tours Ireland in light of his Game of Thrones Experience and enthusiasm for the show. 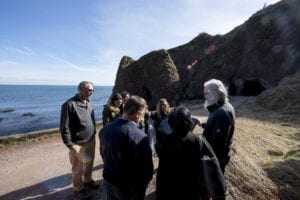 To learn more about Giant Tours Ireland, visit Northern Ireland Tours page. Book a private Game of Thrones Tour or a Custom Giant’s Causeway Tour with Flip today. Who knows, some juicy details about the HBO show may be revealed!